“I invite you to be evaluated for ADHD. If you have it, finding that out will change your life,” Dr. Jesse McClelland

Dr. Jesse McClelland’s Story
I have ADHD. I was diagnosed about a year after I graduated from medical school. At first I thought to myself that if I had gotten through medical school without knowing I had ADHD, why would I need treatment? Then I learned about how ADHD impacts All aspects of your life, and outside of being a good student, my life was kind of a mess. I was messy and disorganized and in many cases just barely staying afloat. I was unreliable, always late, and forgetful. Maybe most importantly, I knew I wasn’t living up to my potential. I never had. There always seemed to be something missing that made certain things harder for me than they were for others despite how smart I was. 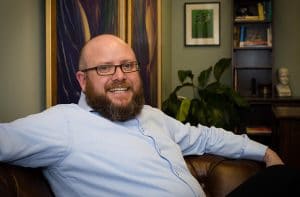 The knowledge that I had ADHD explained so many things, that moment changed my life and allowed me to understand and accept myself in ways I could not imagine. Just the knowledge of ADHD, even untreated, can change your life. But when I got treatment, I was for the first time able to tune out the distractions and think clearly. I always thought that I could think clearly, but now I knew that that was not true. It was as if I had some vision problems but was getting by, and then I got some glasses and realized for the first time what it was like to actually see.

ADHD is a hidden epidemic!
Many people think that ADHD is some kind of fad diagnosis that we throw at kids so we can treat them with medications to modify their unwanted behaviors. While it is true that some children are inappropriately medicated for ADHD when they do not have it, ADHD has actually been woefully underdiagnosed. Most individuals who have ADHD have no idea that they have it. Life is more difficult, and they don’t know why. It is estimated that between 5 to 8% of the population at large has ADHD, and very few of them have been diagnosed. One of the reasons is that despite the fact that ADHD has always existed, we’ve only been looking for it for about two generations. That means most individuals older than 35 missed the chance to potentially being diagnosed and treated for ADHD as a child.

Why I Treat ADHD as a Specialty: The Elephant in the Room

The truth is, I do have a special interest in ADHD because I have it, and because it runs in my family both up and down. But the real reason that I have chosen to specialize in ADHD has more to do with my experience as an ADHD patient than anything else. Many out there who have been diagnosed and treated for ADHD have experienced the stigma associated with it. Because psychostimulants are used to treat ADHD, many doctors shy away from prescribing them because they are afraid of drug seekers or are just uncomfortable with diagnosing and treating ADHD. Many in my own profession believe that ADHD should only be treated after other comorbid illnesses, such as depression, anxiety, and substance abuse issues have been treated. I myself, have encountered doctors who have refused to treat my ADHD without being re-evaluated by a new psychiatrist despite my years of prior treatment and records from my doctor. Relative to other illnesses treated primarily by psychiatrists, I have felt within my own profession that ADHD is in most cases completely overlooked, even in patients who have prior diagnoses. ADHD is frequently misdiagnosed as bipolar disorder, which can lead to prescribing strong medications with heavy side effects which do not treat the symptoms since it is a misdiagnosis. ADHD is 5 to 8 times more prevalent than bipolar disorder, yet as mental health professionals we are trained to look for bipolar disorder first, followed by ADHD, after considering 10 other diagnoses. Even in other fields of medicine, it would be considered ridiculous to over look something prevalent while focusing on something more rare, but that is precisely what has been happening with bipolar disorder and ADHD. The criminal thing too, is that ADHD is extremely easy to treat. Treatment is effective in more than 90% of individuals just with the first line medications. I would challenge anyone to find many more treatments in the field of medicine that are more effective than 90%. This makes ADHD one of the most treatable illnesses that exists.

I get great joy out of diagnosing and treating ADHD in individuals and watching how their lives change instantly in front of my eyes. I cannot imagine a more rewarding experience in medicine then being able to tell someone the answer to their lifelong problem and tell them there’s greater than 90% chance I’m going to be able to help them. People come to me from all walks of life. ADHD is present at all ages and all cultures. You may need treatment to help continue your treatment from childhood with an adult psychiatrist, or you may be in your 70s and simply want more out of life. Contrary to popular belief, ADHD is not an illness that just affects your ability to do schoolwork. It impacts all aspects of your life, including your work, family, and social life. There is never a time in your life when you would not benefit from treatment of ADHD to improve your outlook and achieve your potential. Untreated ADHD can lead to all kinds of unwanted issues, including depression, anxiety, substance abuse, and other problems. It can lead to core frustration tolerance and difficulty with your relationships.