Theta Burst Stimulation (TBS) is a revolutionary  form of brain stimulation that more closely mimics the natural rhythms of activity in the neurons of the brain. Theta Bursts are short bursts of stimulation at high frequencies, with the bursts themselves being applied 5 times per second. First used in 2005, TBS has been shown to produce stronger and longer-lasting changes in brain activity, while requiring much less time to administer.  Clinicians believe that TBS may eventually prove to be more effective than the older forms of stimulation in treating neurological and psychiatric disorders. We are so excited about TBS stimulation that we offer “off label” TBS treatment on 2 different TBS devices-

for depression and a variety of other mental disorders. 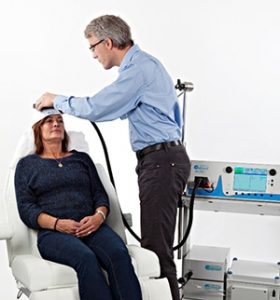 A leading TMS clinical expert in the U.S. currently achieves 80% remission rates using FDA approved TMS technology devices but believes that the future of TMS depression treatment lies not in the TMS protocol currently in use, but rather in Theta Burst Stimulation. “I think that the future of TMS is in patterned treatment protocols like Theta Burst”. TBS devices have much greater flexibility than other devices on the market. “This should allow for higher remission in the US. TBS is arguably both safer as it uses lower intensity, and more tolerable with less total time per treatment than conventional TMS. This would allow even more patients to benefit from TMS treatment,” says Dr. Stubbeman who encourages doctors to use TBS in combination with neuro-navigation.

TBS is “off label” and not currently covered by insurance. However, as TMS treatment can much shorter in duration per session (3-6 minutes per session, as opposed to 36 minutes) and performed at an accelerated pace, Dr. McClelland offers TBS at greatly reduced prices in pre-paid packages. Contact Us to learn more!

Please click below for more information regarding the research of Theta Burst Technology: